If you have a string instrument of any kind that needs fixing, a mistake you made in building a new instrument that you need to "disappear," or a question about the ethics of altering an older instrument, ask here. Please note that it will be much easier for us to help you decide on the best repair method if you post some pictures of the problem.
Post Reply
34 posts

A while ago an attempt to cut fret slots failed miserably. The upper half is completely off and in the lower half a few slots turned out too wide. I was using my tiny Kataba saw because i did not find my fret saw.

The fingerboard - indian rosewood - has already been glued on the neck by the manufacturer (Framus, unfinished neck from the end of their production in the mid 70s).

If possible i would like to save the wood and try a repair - i know, uneconomic, but in any case a good exercise. And i could still make a new fingerboard if that repair failed

I own a piece of indian rosewood in similar color and with similar texture, but narrower than the fingerboard, and i am not sure wether and how i should cut such narrow slices of wood. Or should i widen up the slots a bit?

Thanks for any tips.

What I have done when inadvertently cut a slot in the wrong place is filled it with veneer of the same species and as close a colour as you can find cut of the end grain of a strip.

Gluing the veneer in with cyano and making sure it is proud of the fretboard face then sanding it down level and pushing the sanding dust into the slot while the glue is still wet.

I've cut thin strips from the end of a scrap piece of fretboard using a miter box to fill in an occasional misplaced fret in an ebony fretboard. Veneer should also work, but I wanted the grain orientation to be consistent with the fretboard--though I doubt that it really mattered.
Top

Hi Beate,
How far off are the fret slots? If they are not too far off sometimes the fret will cover the mistake after filling and recutting the slot. Another possibility might be to veneer over the fret board and recut the slots.
Top

Some, but not all slots will be visible after closing and re-cutting.
I wonder how i actually managed to cut that far off... (well, two o'clock in the night, and the upper part of the neck is more difficult to clamp...)

In order to hide the error the easiest would be to use the identical spare neck i have...
But anyway, i would just like to repair my mistake.

Is there any precaution i should take when i try to cut slices 0.5 mm thin from a piece of rosewood? That thickness is identical to the thickness of the cut of my saw. Is it better to use a Kataba or a fine saw with a stiff back?
Top

I use plane shavings to fill in fret slots (yep, I admit it). I plane along the grain so the grain is strong in the direction of the slot, the shaving is tapered, I trim off the bottom thin part so it fits tightly into the slot, then a little more, and I press the shaving in with glue so that it is a quite tight fit. Dry appropriately for glue (I often use CA for this, so 10 minutes), scrape or chisel excess, sand, and recut slot. I have quite successfully moved a slot .010" (half a slot width) using this technique. If I bail out of cutting the slot before it's full depth, then I use sanding dust and CA glue to fill in.
Top

I think I would try mixing a small amout of epoxy with some fine wood dust that's a bit lighter than the rosewood, perhaps walnut if you have some. The dust will look a lot darker once saturated with the epoxy so you need to start lighter to get close to a match. Otherwise cutting a narrow wedge shaped strip off the end of your scrap piece and jamming it into the offending slot filled with hide glue may be possible if you can saw that accurately without turning the sliver to dust in the process. I don't think I'd have the patience for that. In my shp I'd probably plane off the top of the fingerbard to the bottoms of the slots and glue on a 3mm veneer over the whole thing but that would require a lot of time without the machines I have to play with.
Top

Well, i could easily plane off the top of the wood. I do have an electric plane, admittedly a cheap one cutting only 0.9 mm at once. But nevertheless a job of a few minutes. Even fully cutting the fingerboard into pieces.

If i was a professional that's what i would probably do in such a case. But one of my goals is to learn and to practice how to repair this (i have a 2nd fingerboard where exactly one fret slot needs to be re-cut, too). Effort is not necessarily an issue, at least now. And i have time, could even do one fret a day if i like...
Top

I would fill the fret slots with plane shavings as Brian Evans suggested and then on the ones that aren't hidden by the frets I would do a micro version of Frank Ford's divot filling technique. A few cuts and fills with the grain and across the slot will help "break the line" as we used to say in the furniture touch up world and make the miscut slot less visible.

An electric plane will just make chips. You need a manual plane to make long shavings.

I use commercial veneer because it is often the right width to completely fill the saw kerf. And it is likely that the veneer will be covered by the fret even after nudging it over a bit. So you may not even need to worry about matching the veneer to the fretboard.
MIMF Staff
Top

I bought a bunch of bass guitar fretboards which I have been cutting off to make guitar fretboards so in the offcut part I tried filling one of the fret slots using the method I described above. I first filled the slot with plane shavings. I boiled the rosewood shavings in the microwave to help me unroll them. I superglued them in the slot and trimmed them flush. I made several cuts across the filled slot with a razor knife and then sanded the board leaving the dust in place. I worked superglue into the dust filled grooves, then resanded the board.

great! thanks very much.
Top

Jus one additional question: in my 1st attempt doing the repair (last night) the plane shavings were sufficiently long and curly. And really brittle. What kind of plane should i use to obtain less curly shavings?
Top

You might try moving the chip breaker back a bit from the edge of the blade on the plane you have. It might not plane as well, so you will probsbly put it back after you get your less curly shavings.
Top

The plane i've been using does not have a chip breaker, but very narrow mouth. But thanks - this tells me to try a different plane without chip breaker and wider mouth.
Top

Getting long useable plane shavings is very hit or miss. I tried a few days ago and had to give up. I would still recommend obtaining some veneer. I use it for all kind of things in my shop. Most any woodworking supplier will have it for sale.
MIMF Staff
Top

I took a different plane - my wooden rabbet plane - and was a lot more successful. The other - worse - neck is a bit lighter. 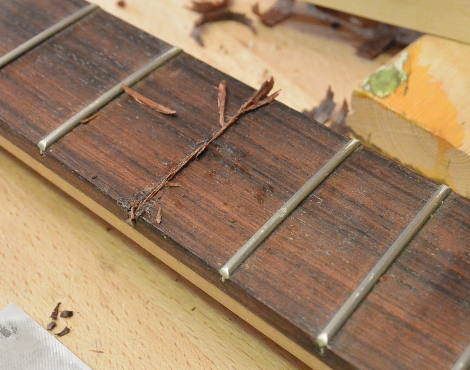 Well, and here the result - in the central part of the slot the glue has sunken in a little bit. As the new slot will cut through it, i'll leave it this way. Thanks for the help. 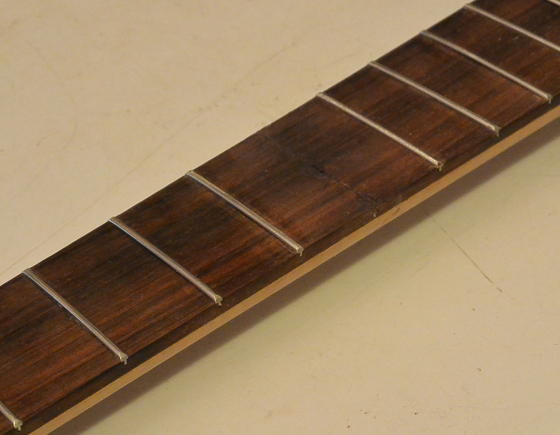 Just in order to show you my catastrophic result in all its extent... 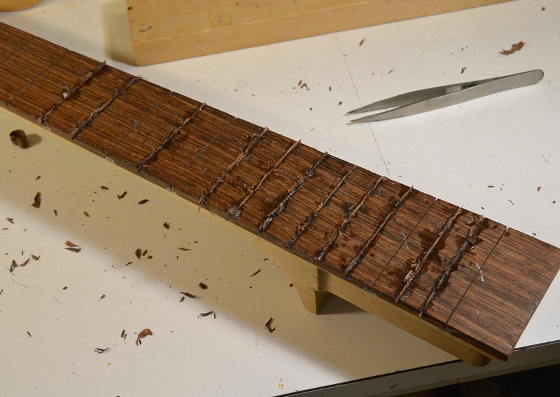 It looks good. After you sand that, you won’t even be able to see the slots (from 2 meters away). And, anything you can see will probably be hidden by the new frets. Good luck.
Top
Post Reply
34 posts