If you have a string instrument of any kind that needs fixing, a mistake you made in building a new instrument that you need to "disappear," or a question about the ethics of altering an older instrument, ask here. Please note that it will be much easier for us to help you decide on the best repair method if you post some pictures of the problem.
Post Reply
95 posts

Just for the curious: the heel of this guitar. I showed the same image in the discussion on best practice of (dovetail) joints. As shown above, that heel is broken, roughly at half height, and the neck has started to fold on. In its present state, without load, the crack is closed. Even with the screw drilled in it opens up for a few 100ths of a mm, and that should already be noticeably reduce the bridge height. Paul Breen wrote:Fixing the top on this one will be a bit of a crap shoot. .... You may need to come up with some unorthodox method, ...

Well, toward the unorthodox methods:

On the delaminated bottom plate i try to look if giving it a "finish" with thinned fish glue will change the tone. The hope is, that it might soak sufficiently into the fine and hardly visible cracks which are everywhere on the inner ply and "glue them together".

my current idea is to weaken the braces and to distribute the load on more shoulders.
weakening the braces, i.e. strongly scallopping them should have the side effect to reduce the tension on the glueing connection - the brace will withstand the pressure to a smaller degree and just deform stronger. They are probably oversized anyway, so i will definitely increase the scallopping; the question is just how much.

In addition i might distribute the load on more shoulders, i.e. add one or even two additional braces. Small ones, so that the top actually will have something like a fanned bracing.
This should allow me to further reduce the height of the old braces - carefully, i am aware that the strength changes with the 3rd power of its height but only proportional to the (total) width of the support bars. Maybe it'll suffice to give the additional bars a width of just 4 mm (cut one of the bars i saved from the thinline in two halves...)

What Yo You think of the idea?
Top

Here a sketch of the basic idea (unfortunately i cannot edit my previous posting any more): Such a guitar would more or less demand for a full contact bridge, wouldn't it?
Top

So final state. The braces are now done. The small gap below the heel has been filled.
Tap tones are promising and hopefully better than ever before.
I could close the box again.

But i have the idea of adding a small sound hole in the bass side rib. Maybe something based on the f-hole shape? How large is small?

And i am a bit frustrated that she will look prettier from the inside than from the outside....
Top

Next problem area: the heel. I removed a bit of the laquer in order so check the state and in the hope to find a path just to fill in some glue. And i found a brittle black mass. After removing it it looks like this: A crack of more or less uniform thickness. Which suddenly ends where i stopped digging with the knive. Further below there it looks as if there was wood, but the crack seems to go deeper. The light spot on the right of the cut looks like a hidden nail (i think i,'d test that by cutting a bit into th channel with a metal saw...); there is also some resistance to the knife. And the opening looks as if someone had tried to open the crack with a saw, doesn't it?

At depth it almost feels as if the heel was hollow. Mhmm...

I would avoid to do a neck reset.
Mostly because
a) the neck angle seems to be ok.
b) the glue joints in the mortise of both parts appear to be stable.
And that heel withstood the massive tension of a set of .013-.056 flatwounds over some months.

Would it be a suitable repair to insert a tapered shim of appropriate wood (birch or maybe beech) and then also to reinsert the screw?
Top

If the screw is holding well then that seems reasonable to me. I'm always of the opinion that a wood screw is inferior to a metal screw with tapped threads so I would consider bumping up the size, precisely drilling out the heel to the minor screw diameter and tapping carefully with a fine thread tap (finer threads have more holding power). Then enlarge the upper section of the heel with the exact screw diameter. A solid wedge made from say, european beech, that won't compress ought to maintain the integrity for a while. Typically 15-20mm of threads in hard wood will exceed the tensile strength of the screw.

I think opening up the crack and cleaning it so that a well fitted wood wedge could be inserted and glued would be the best approach. But you need to get a tight fit on all surfaces for this to be successful.
MIMF Staff
Top

Well, a lot has happened: the box has been closed.

After a bit of fret levelling i checked for the bridge height. As expected, it has lowered to about 14mm in the centre, roughly 2.5 mm lower than previously. Well, not a surprise; it simply shows the success of my attempt to bring up the bridge. The photo shows that even my old standard bridge which has already been modded for minimal height, can't be used anymore. 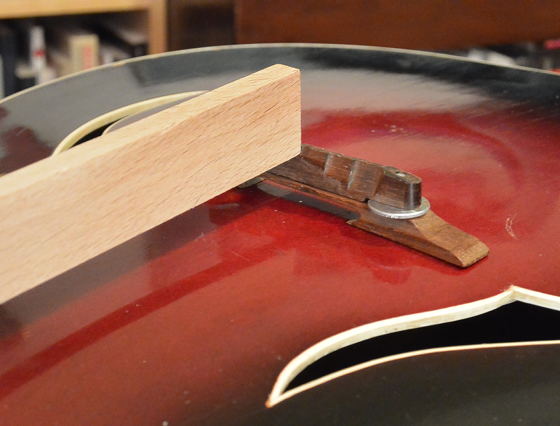 The new bridge will be styled a bit after the Selmer Maccaferri bridges, but without the "moustache ends" outside the actual bridge. Again Katalox base with bone saddle. And hopefully the string holde remains usable.


Despite of that, the bridge height is unusually low for an archtop, isn't it? It looks as if the guitar has had its neck angle reduced in the past.


A well, another complication: the old binding shrunk. I placed the gap to the end block, so it is possible to fill it with some wood. 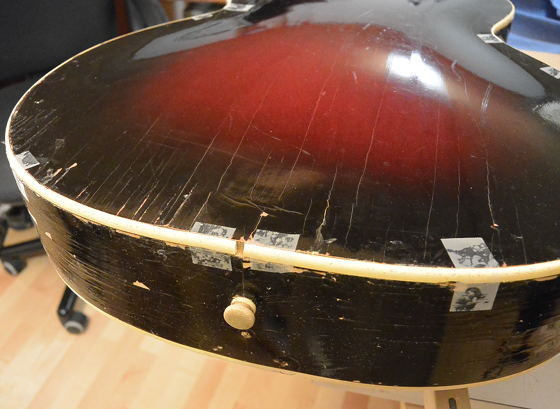 and finally the closed headstock. I used a contrasting color to emphasize what can't be hidden anyway. The neck seems to be strong enough even without the screw, but i think i'll use a new one despite of that. 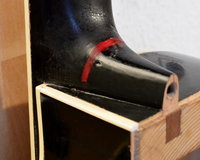 Amazing work Beate. I can see why incorporating an adjustable neck angle on this type of guitar would be an asset over the long term. I wonder if a flat top, glued on acoustic bridge could be carved and fitted. It might require a whole lot more bracing under the top but it might pump up the volume too.
Top

Mhmm, i forgot to finalize the thread:

It is already a few weeks ago that it is playable. I made a (very) preliminary bridge from beech which i stained black and put strings on it - a set of Thomastik halfround bronce strings gauge .011.
A bit more fretwork, and then watched it for stability of the top: Meanwhile i also added the binding (it shrunk, there is a gap left to be closed

), glued a dowel into the heel and made a cover from a rest of white MOP. And added a strap pin to the heel.

Last weekend i played it unplugged in a church - pretty bright, loud, yet well balanced. Just what You would expect from such a guitar. Ability to do large volume and large dynamics and cutting through the mix. And You would not imagine that this comes from a laminated top...

It looks as if i could have been more brave and made the top more moveable. But from the experience with the other problem child (which is still moving under the string tension, but very slowly) and the water damaged plies i wanted to be more on the safe side and left the top stiffer as it could probably have been.

It is still waiting for a better bridge. Maybe again beech stained black, but with better compensation and bone saddles. Acoustically I am pretty impressed on that wood... But a check for the flageolets shows that there is still some potential for fine tuning - hence the idea of using bone saddles.
Top

Great work Beate and such a fine looking guitar in spite of the lackluster construction and materials.
Top

Some well known artists liked these guitars, too:
http://www.elvispresleyfansofnashville. ... oul-museum

But that is a better one with a carved top. And not, it is not a Framus.

BTW: 150 guitars a year seems quite steep for a one man shop.
Top

I have really enjoyed this thread.
Nice work Beate
Top