If it's not a guitar or a bass guitar discussion, and it's got strings, put it here.
Post Reply
33 posts

Now I am retired I am finally trying to complete the Pimpard style hurdy gurdy that I started back in 2002! Time fly's, doesn't it?
Not being a luthier or musician I have discovered that I have made some construction errors and am hoping for advice on how to overcome them as I go along.

My current problem is that I am using tuning pegs which look like violin pegs but have gears inside. I drilled into the head so that the pegs were roughly perpendicular to its face and that looks ok, however, the problem is that the strings now do not meet the pegs at right angles, but in such a way that they tend to slip off the bottom as the peg is rotated. I am wondering if there is a way to prevent this? The only thing I can think of is to have the strings pass through a guide which would deliver them an a more appropriate angle, but I'm not sure what effect if any, this might have on the way the string works, and the sound it makes.
I would have included a picture but can't figure out how to do that yet.
Barry
Top

Hi Barry,
A photo would be great, here's some help on posting photos: http://www.mimf.com/phpbb/viewtopic.php?f=19&t=1656
Top

Barry, I have done exactly the same mistake on a much earlier one that I made about 15 years ago. I inserted a (very hard wood) dowel going across the inside of the head, and the strings have to pass across it, angling downwards in the process, thereby making it just right for the pegs. There shouldn't be any effect on the string's performance, unless you manage to make the dowel (or any other guiding arrangement, like a simple screweye hovering in the roof of the head) exactly opposite the nut, with the effect of the string not quite knowing which is the real nut, the old one or the dowel/screweye, and rattling between the two. But I doubt that with French-type heads it is possible at all, them being rather acutely angled downwards.
Top

Hi Folks,
Here is a picture to illustrate my current issue with the tuning peg angle. Since posting my original post I drilled the holes a little deeper which allowed more peg to poke out and may have solved the problem. I don't have real strings yet and am using fishing line which probably won't react quite the same.
I will also include some other shots so you can see where I am at and possibly give me some 'watch out for's '.

Some of the tangents in place.

The geared pegs I am using

Shows the angle of string to peg.

Yuri Terenyi wrote:Barry, I have done exactly the same mistake on a much earlier one that I made about 15 years ago. I inserted a (very hard wood) dowel going across the inside of the head, and the strings have to pass across it, angling downwards in the process, thereby making it just right for the pegs. There shouldn't be any effect on the string's performance, unless you manage to make the dowel (or any other guiding arrangement, like a simple screweye hovering in the roof of the head) exactly opposite the nut, with the effect of the string not quite knowing which is the real nut, the old one or the dowel/screweye, and rattling between the two. But I doubt that with French-type heads it is possible at all, them being rather acutely angled downwards.

Thanks Yuri,
I am probably going to go with the dowel idea
Barry
Top

I'm presently making the trompette bridge and it looks as if the chien is just held in place in a small dado by the string hooking into it. Does anyone know if this is this correct?
It's also not exactly clear how these strings are anchored at the crank end. Again if anyone can help me with this, I'd be very grateful.
Barry
Top

Here is how the trumpet and drone strings are anchored on mine- there are small "tie blocks" glued to the top. Holes are drilled at an angle that exits near the top of the side (but below the top). 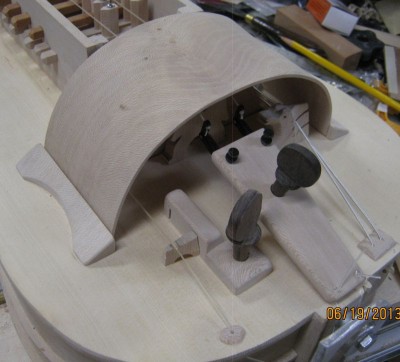 Thanks Charlie,
Are the holes exiting from the sides of the block or sides of the hg?
Mine is supposed to have blocks on the sides of the lute body with some kind of tiny metal eyelet pin to tie the string to. The strings just seem to bend over the rim of the instrument.
Barry
Top

The top edge of the side (just below the "kerfing") in my case.
Top

So do you just tie a knot in the end of the string or something that can't pass through the holes?
Barry
Top

Ah yes. In fact, the drones I got already had a ball on one end and I just tied a knot on the trumpet string.
Top

Ok, this leads to my next question. I am trying to decide on strings to buy. Can I use generic instrument strings or do I need specific hg strings. I don't want to spend too much on them in case my hg is a total flop. Also I'm guessing that the Seattle area would have the closest supplier to me.
Barry
Top

I don't think you need hg-specific strings. From what I've read, gut strings (or silver-wound gut for the drones) are preferred for their sound.

Hey, hey, hey, guys!!!
We are talking here about two totally unrelated types of trompettes. The French type is rather different from what Charlie used. This one is a specifically Germanic type. There are (in existence, at least) three types: these two and the Hungarian. Now, I really don't know about the Germanic one, as I never worked with it, but from guessing by the look of it is is a variant of the Hungarian one. (or the other way round). The principal difference between the French/Hungarian is that in the French one the dog is firmly resting on the soundboard at default state, the tightening string lifting it up into just the right position, where the friction of the wheel can pull it up fractionally, before the tension of the string slaps it back. (which is the very sound, when repeated at very high speed.) Whereas the Hungarian, and I suspect the Germanic type has the dog floating at rest. The Hungarian uses a kind of wedge to push the string behind the dog down, until the dog just touches the soundboard. I suspect that's exactly what that bit of string disappearing below the soudboard does in the case of the Germanic ones, too.
Top

I'm hoping that someone with a Pimpard style hg might be able to post a picture of the dog from theirs so I can get a better handle on what I need to carve. I can't tell if the tenon is wedge shaped in cross section or parallel and the same goes for the mortise in the bridge. I have the Destrem book which has step drawings but I find them quite confusing also.
Barry
Top

There is a sort of overview on Wikipedia here: https://en.wikipedia.org/wiki/Hurdy_gurdy
Scroll down to "buzzing bridge"
Top

Well that is kinda what I have made on the outside but I still can't tell what the tenon looks like. Still, if my pointy triangular one is wrong its not to hard to make another down the road.
Barry
Top

Today I cut a rabbet around the outside of the top and tried to glue on some banding that I made out of some leftover chessboard material. I cut it into 1/16" strips on my bandsaw and tried to glue it into the recess, holding it with masking tape.
It went quite well except on the tight parts of the curve where it broke/delaminated into small pieces. I think I'll have to carve those pieces out and glue in replacement parts to make it look right.
Does anyone have any tipps on doing this properly? The maple and walnut material I used was glued up in my very dry shop for probably 20 years and I'm wondering if maybe it was just too dry?

OK from a distance

Things are beginning to come together as you can see by the picture below. I don't have the strings as yet so I have just used double sided tape to hold the parts in place 'sorta' till a can glue them down with any certainty.

So now I am ready to start making the wheel cover. I would like to do some inlay and possibly a big leaf maple burl veneer in the centre. Just wondering if this kind of thing is usually done prior to bending, or afterwards? I am guessing that this cover is probably less than 1/8" thick , so the cover will be about 1/16" plain maple on the inside plus 1/16" burl on the exterior.
Any suggestions would be appreciated.
Barry
Top
Post Reply
33 posts

Return to “Other Stringed Instruments”