Looks like I'm not allowed to edit my own post, so I'm reposting it to correct some errors with the pics. I'm also adding a pic of the bass bar installation. 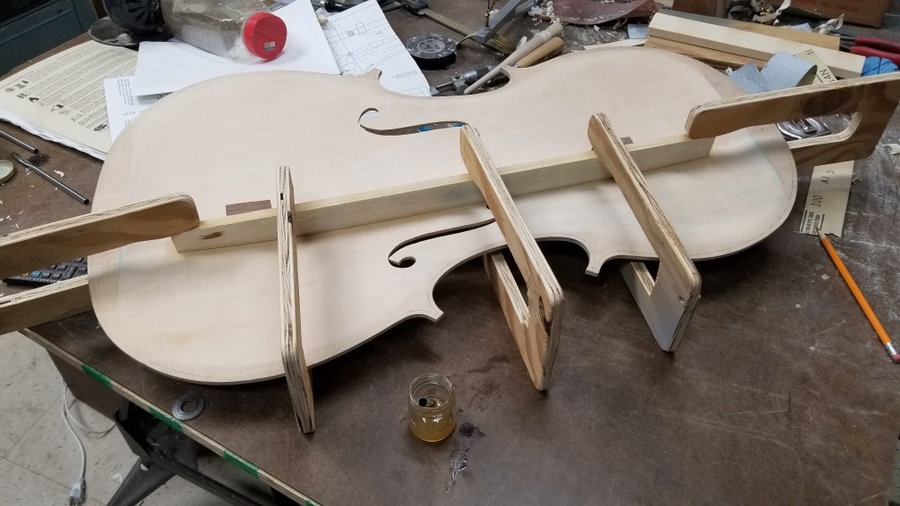 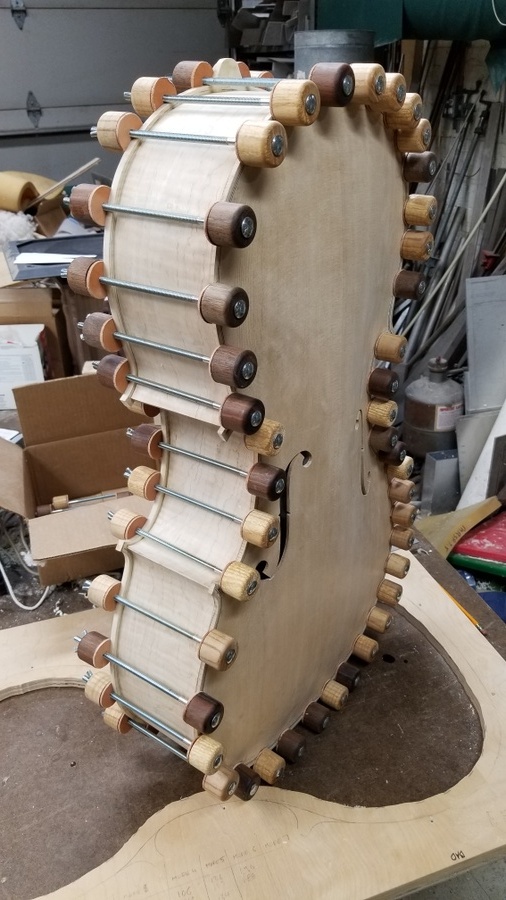 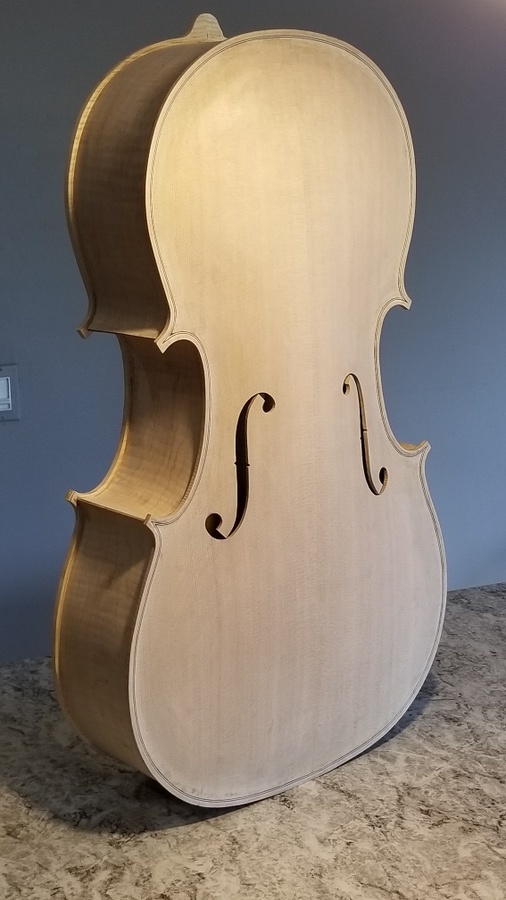 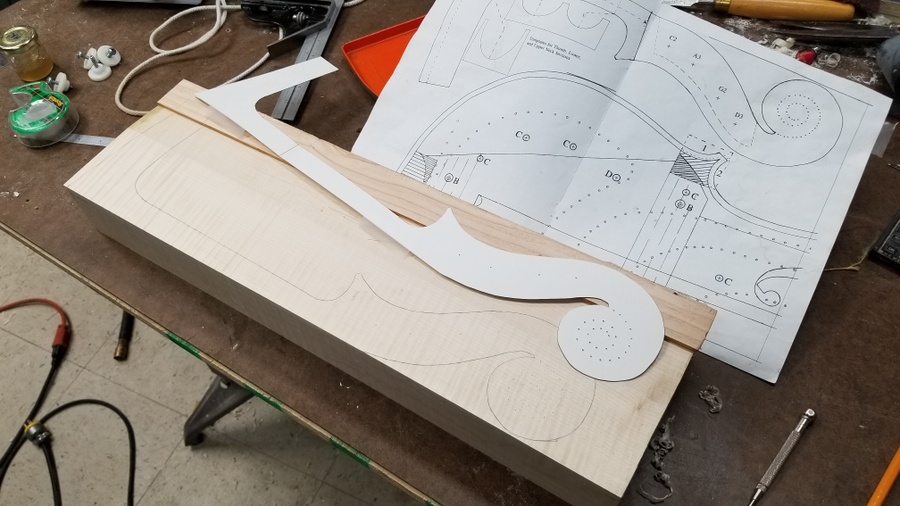 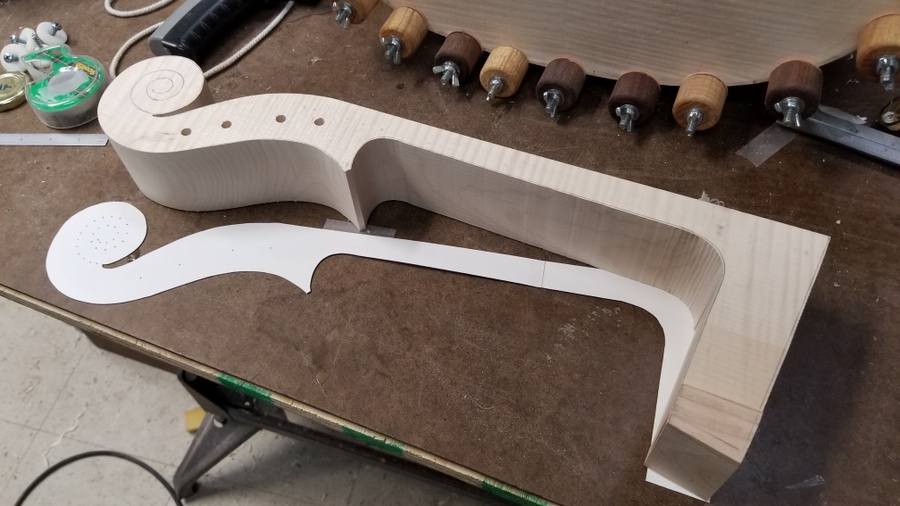 Tom, you can edit your post by clicking on the pencil icon at the top.
MIMF Staff
Top

Yep, you are right. I think you have 30 minutes to edit a post, then the concrete sets up.
MIMF Staff
Top

The mortise is cut to attach the neck, but I decided to wait until all the carving was finished. I've seen it done both ways, but it seems like it would be a lot easier to do with the neck unattached. Most of the carved features are at least roughed in, but I still need to carve the backside of the volute. I've definitely learned to respect wood carvers, because this stuff takes forever. I plan on taking extra time to make everything as smooth as possible in hopes of saving a lot of scraping time later on, but not sure my gouging skills are up to the task. At least the final scraping can be done with the neck attached. Once that happens, all I have to do is fit the tuning pegs and fashion a rough nut, and the thing can be strung. 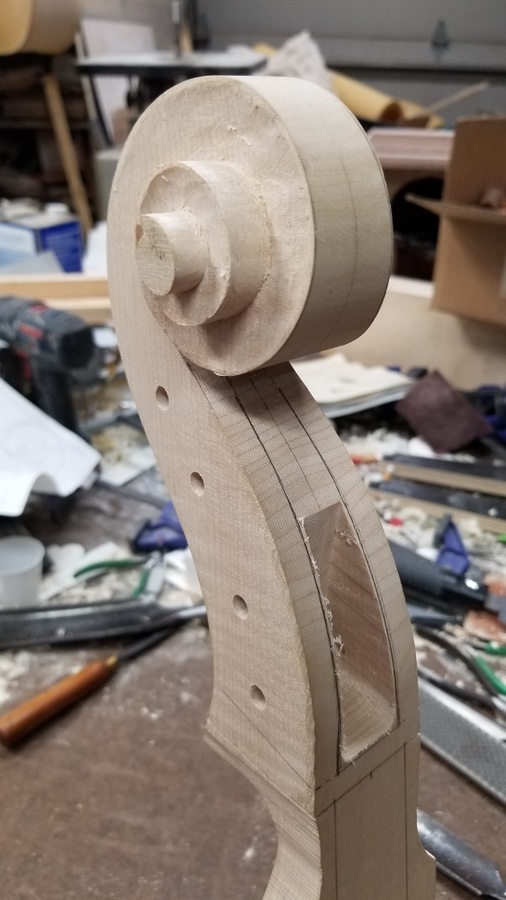 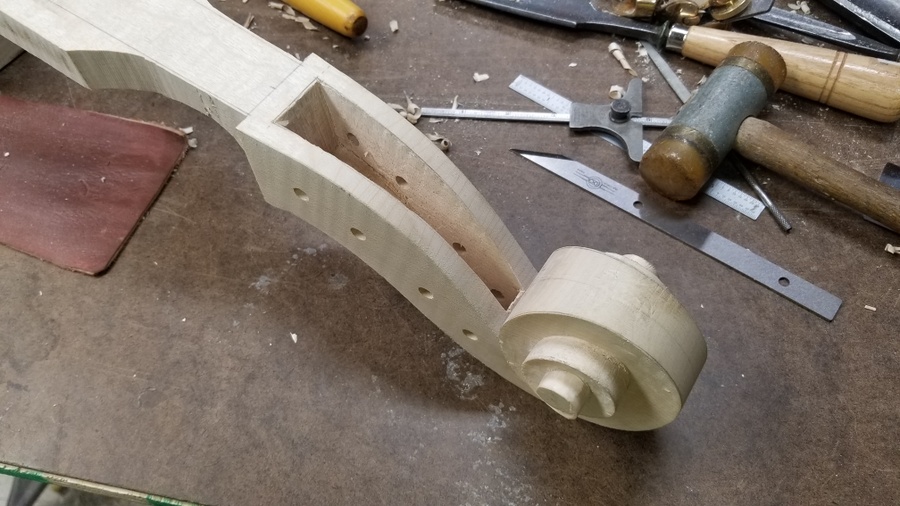 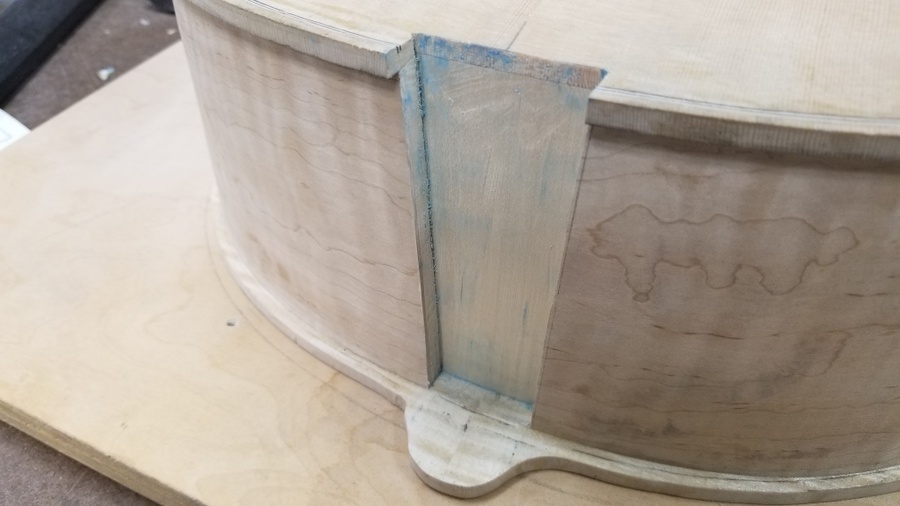 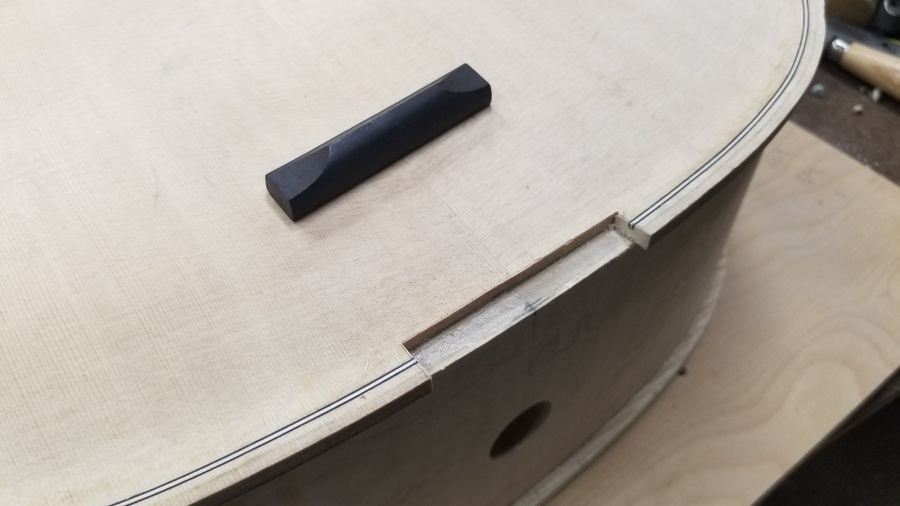 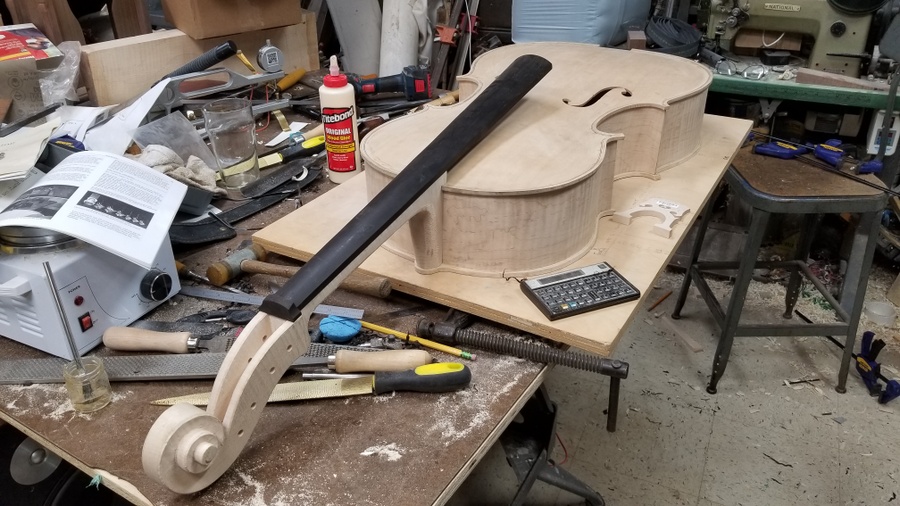 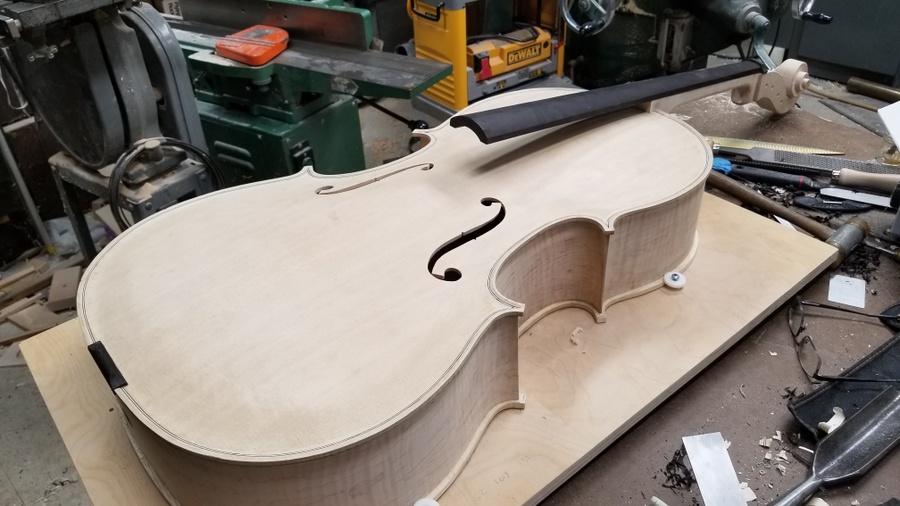 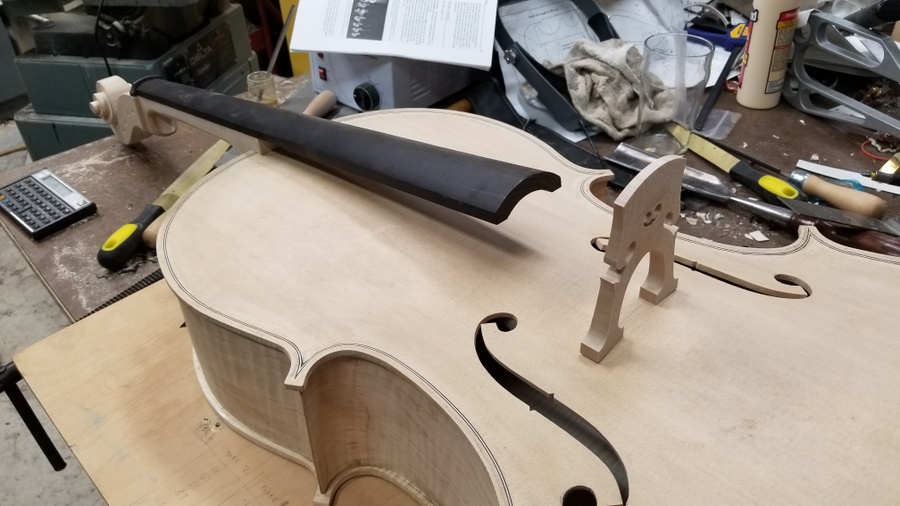 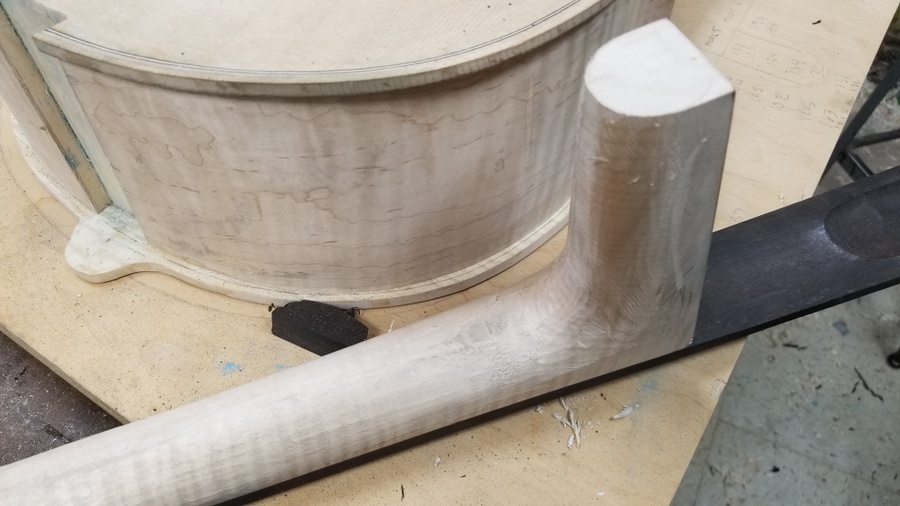 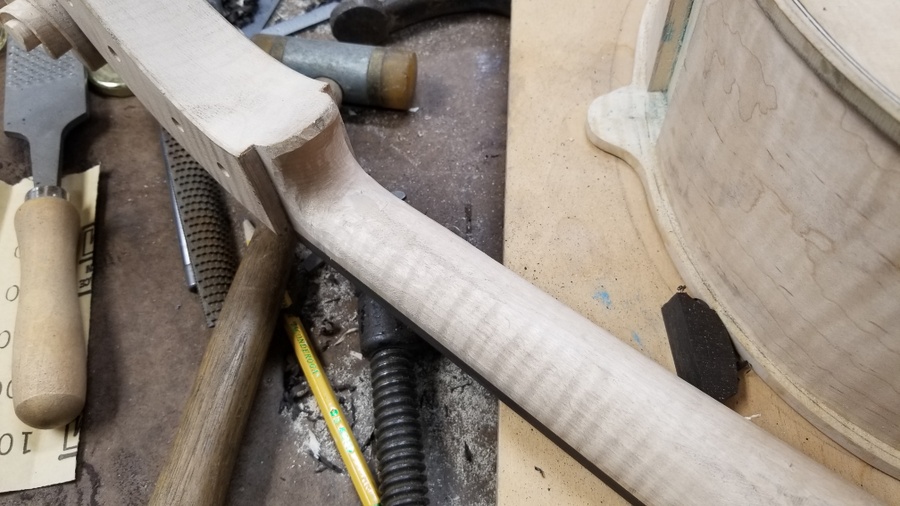 I've been delinquent in keeping up with my progress, so it's catch up time. 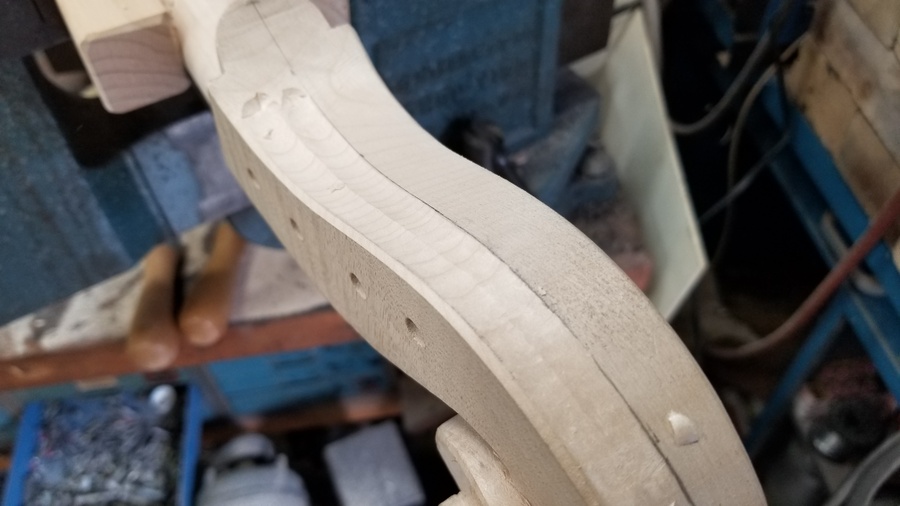 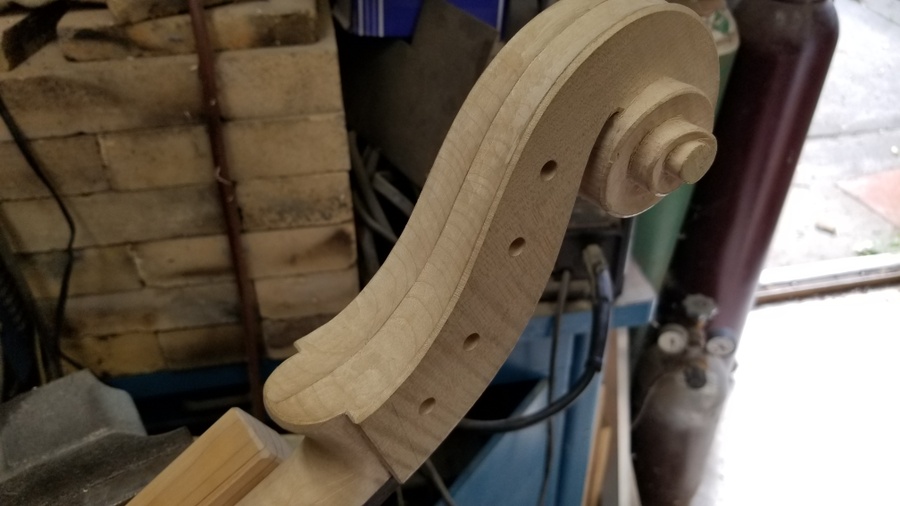 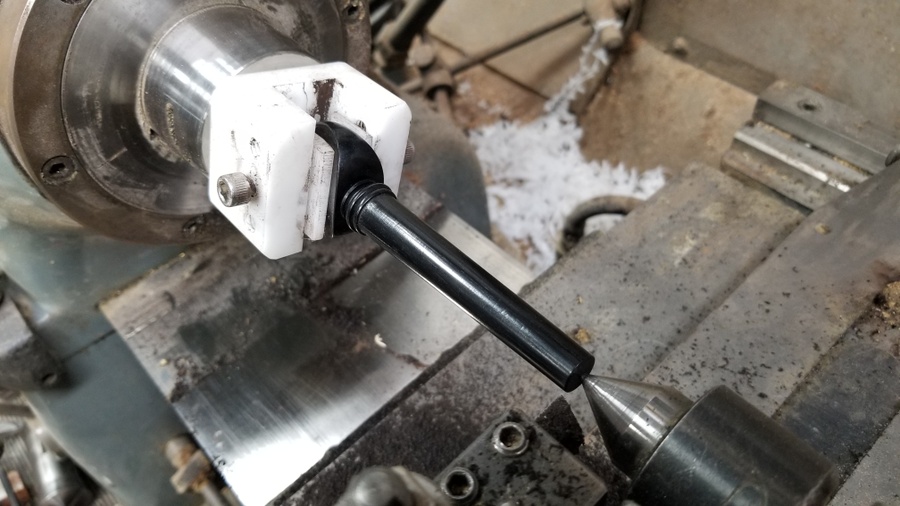 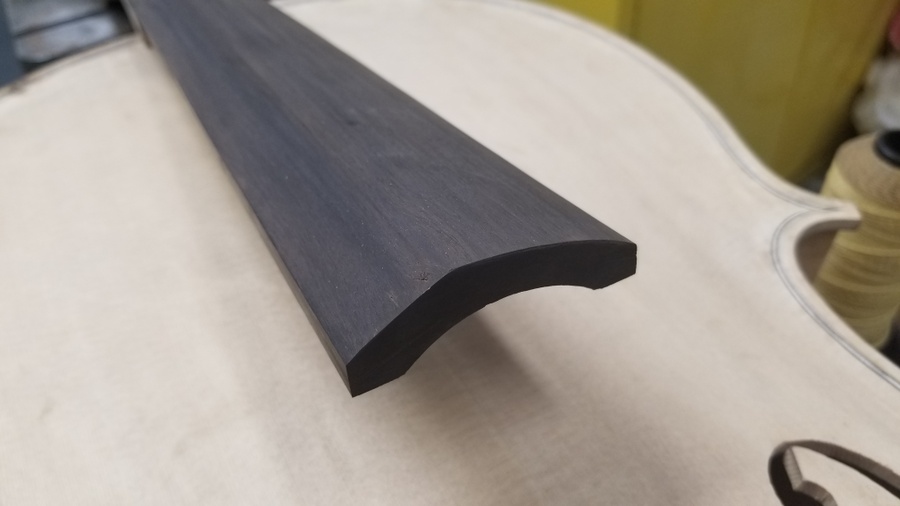 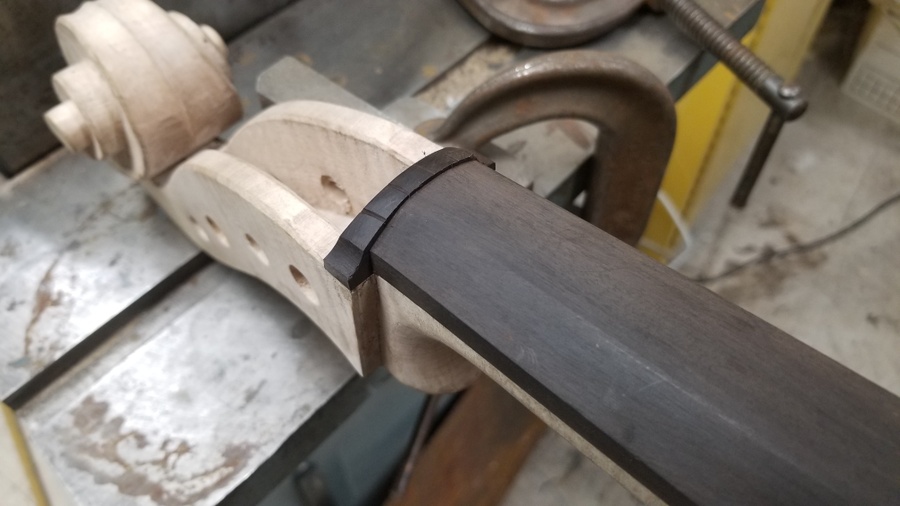 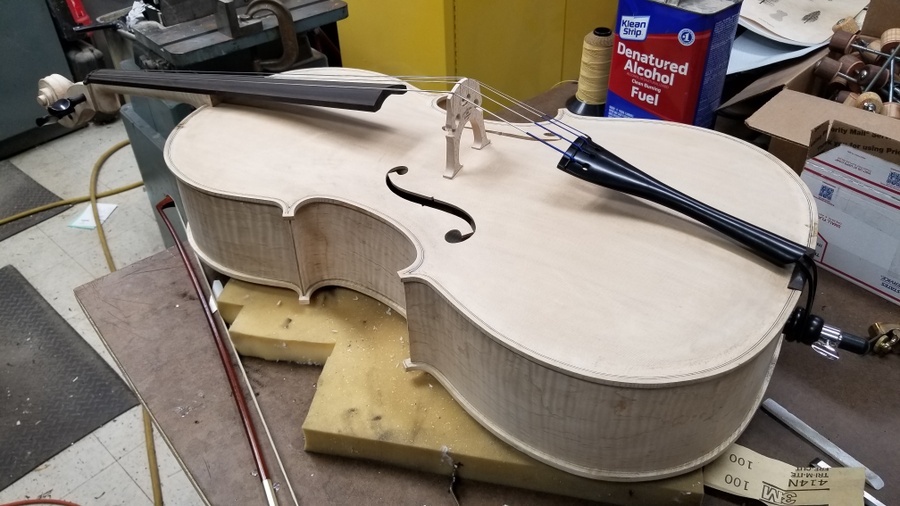 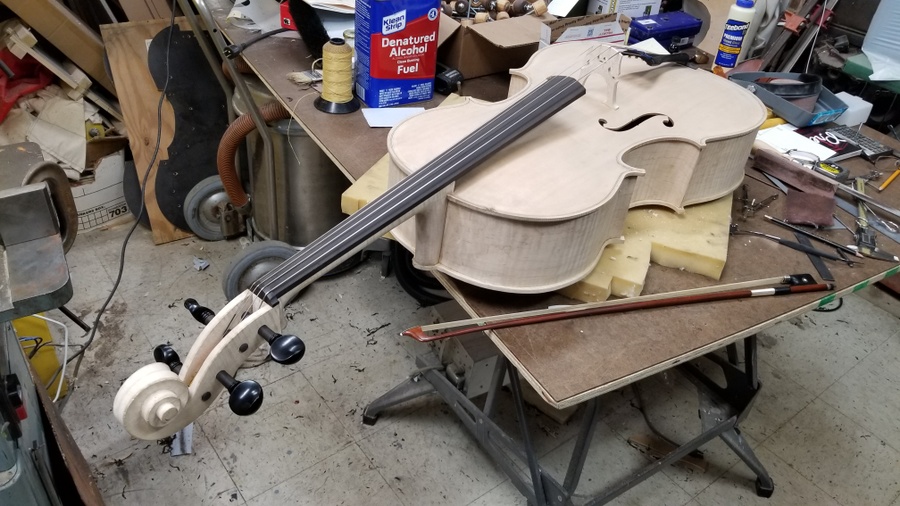 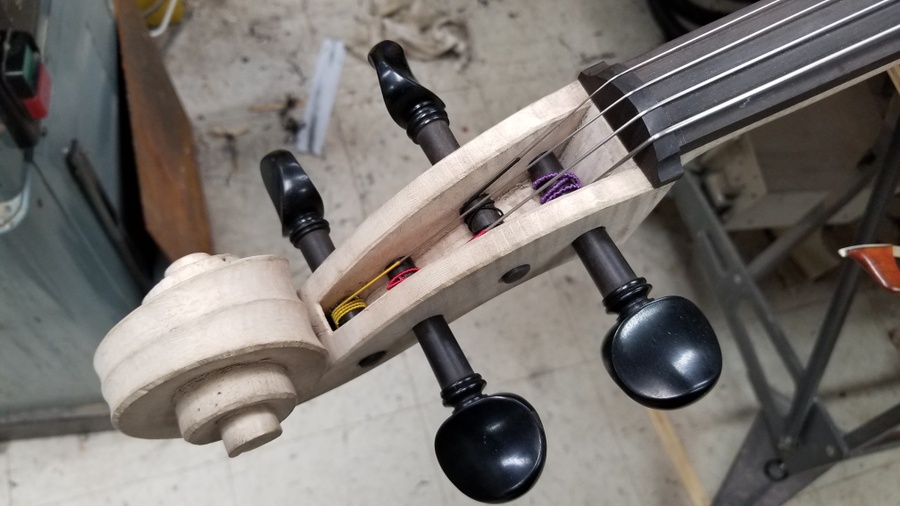 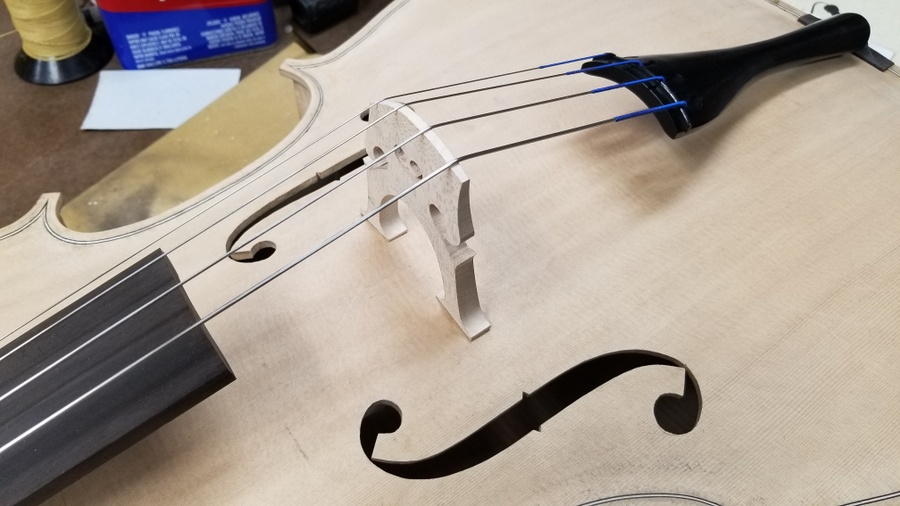 Thanks guys, it's been a fun project.

Tom - this has been fascinating. Looking forward to the finishing.

While it is, as you say, a slow and painstaking process, I really enjoyed it! I’m thinking now of how to incorporate carving into the next build too!
==Steve==
Top

Sure - it isn’t particularly sophisticated carving, but achieved what I was shooting for design-wise. And yes, I have a “guitar gallery” folder in which I’ve saved a couple of really spectacular carved bodies - way beyond what I think I’d ever be capable of, but definitely good grist for the idea mill (like one that has a Ridley Scott Alien carving!!)

I’ll send you a pic via PM as I don’t want to drift this great build thread! Assuming I really have figured out this finishing schedule, I’ll be posting pics and the techniques I used in the finishing section.
==Steve==
Top

I've been spending a lot of time North lately, but I did find time to cook the varnish. The object of varnishing a cello or any similar stringed instrument, is to seal the wood so the finish doesn't soak in, stain it to get a consistent color and apply multiple very thin coats of colored and clear varnish. The end goal is to create a protective and aesthetic coating on the surface of the wood, but not alter the acoustics of it. 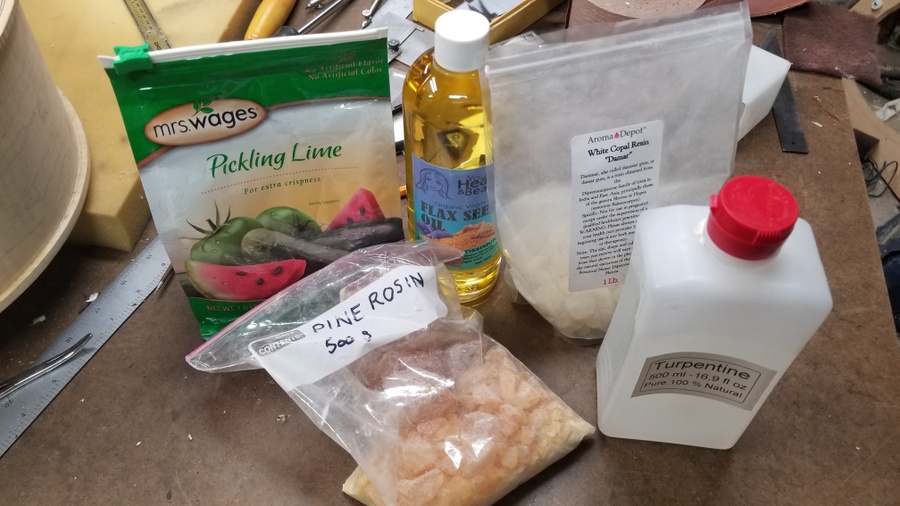 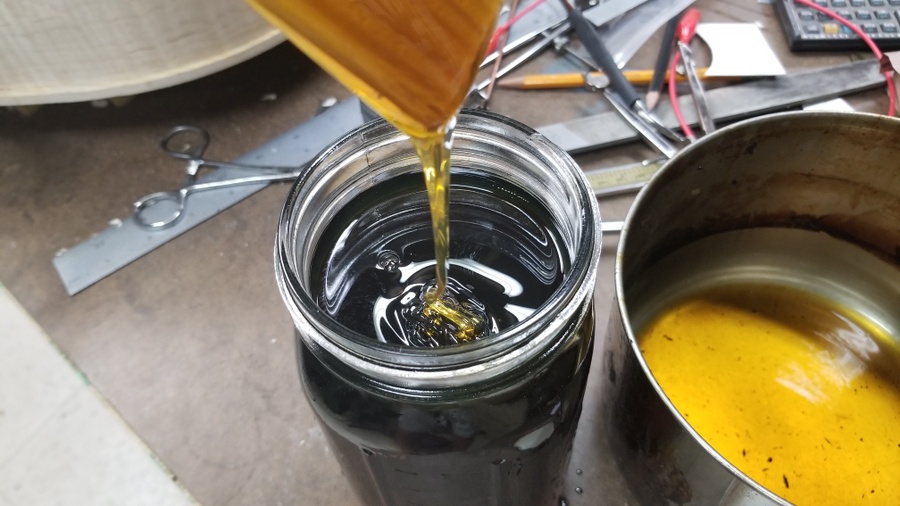