Please put your pickup/wiring discussions in the Electronics section; and put discussions about repair issues, including fixing errors in new instruments, in the Repairs section.
Post Reply
19 posts • Page 1 of 1

Has anyone ever tried using a hot air gun for bending wooden binding? I was primarily thinking of finessing the fit around the waist, but it seems to me that the 600 degrees F that a gun puts out could be easily controlled by distance and movement, and might help loosen binding up as you are fitting it prior to glue...
Top

I use one, but needs care to avoid scorching. And plastic bindings melt easily!
Top

Any make-models to recommend? I'm thinking about getting one also for the same purpose!
Top

My hot air gun, and the one I plan to try with wood bindings, is a really old Black and Decker paint stripping gun, with two settings. Max is 1500 watts, probably, and the other setting is probably around half that. It will scorch wood.
Top

Before I got serious about instrument making I was mostly playing around and tried to work around most of the traditional methods to allow me to get by with he equipment I already had. I used a heat gun to bend the sides on a small bodied instrument around an instide mold. The sides were way thicker than I now know is the right thickness and it still worked. It was however, a miserable experience. It took lots of water and there was lots of burning of my fingers. If you use one for finessing bindings, be careful. I'd be concerned about loosening the other glue joints nearby if you are working on bindings that are already glued in but need some work. In that case, I would first try a hair dryer to see if that could get it warm enough without burning or melting the other glue. If you are working on bindings before they are glued to finesse the fit, a hot pipe might be better.
PMoMC

Thanks Brian and Bryan,
I my case I am quite happy with my homemade hot pipe for bending sides, etc. My goal is to warm and bend small pieces of binding for inlays, for which I am presently using a cup of boiling water. I am also specing out an F style mandolin build, and there are some pretty tight bends at the scroll where the hot air gun would be appropriate. I wouldn't risk using it on the body.

I know what you mean about the waist bends, and it can be a challenge to keep them tight in the rabbet. I have found using small wood cauls rounded off to match the waist curve, held tight with a Irwin clamp across the waist, can keep the waist binding and purfling in tight while fitting and gluing the upper and lower bouts. Here's a picture:

I see, in that case the gun may work well but you will probably burn yourself every now and then. I needed to bend a couple of tight curves for some binding once and jammed a length of copper pipe in my home made bending iron. The copper heated quickly and evenly giving me a fast and easy 3/4" diameter bending iron. I may try the heat gun next time I'm in that situation and see which I like better.
PMoMC

For the mandolin stuff you might also consider the side of an electric soldering iron (clamped in a vise).
Top

I've used a heat gun tip for bending wood binding before. I clamped the heat gun to the workbench and then bent the binding around the tip.
Top

I just posted a couple pictures of a wenge guitar that I am building, in the electric section.
In that post, you can see some of the small pieces of maple that I bent using a heat gun.
I soaked the wood for about a half hour, and bent it around a pipe of the same diameter as the bend I needed. In my case it was an inch and a half diameter.
I put the pipe in my vise and stuck the heat gun in one end. This allowed me to use two hands for bending.
After the piece was bent, I clamped it to the pipe and left the heat on for a few minutes.
I used the low heat setting for everything.

As to the kind of heat gun you use, I don't think it matters too much, as long as it has two or three heat settings.
Mine is an inexpensive Mastercraft gun.
That, for my non-Canadian friends, is a brand sold by a chain of stores called "Canadian Tire".
I need your help. I can't possibly make all the mistakes myself!
Top

I have a cheap Milwaukee brand heat gun that's been indestructible for several decades. You can also get a $10 one from Harbor Freight that comes with a pile of attachments, pretty worthless for paint stripping but potentially good for bending the occasional binding strip.
Top

I bend my guitar sides old school over iron pipes: I have a 2" diameter pipe and a 4" diameter pipe: both have baffles in the end. For a couple decades I used a torch to heat the pipe. It's always a challenge to get the heat just right to avoid scorching. I teach an acoustic guitar building class at the high school I work at. One day I forgot to get gas for the torch, so in a pinch I used the heat gun as a heat source (one of those 2 speed ones from ace hardware) . It worked GREAT. There is plenty of mass in the pipes, so it takes a while to get the pipes heated up enough for spritzed water to dance on the pipe, but it stays hot nicely. And even no scorching on light woods like ash, maple or primavera. So that's my new 'go to' means for bending.

I bought one of those 11 setting digital guns - just didn't work out for me. I made a jig to hold the pipe and the gun, and it eventually lit the jig on fire and melted the end of the gun. Now I use a charcoal lighter.
Maybe I can't fix it, but I can fix it so no one can fix it
Top

I tried and gave up using a heat gun.
I made a torch-heated pipe as shown in Cumpiano's book.
What worked for bending Mesquite binding was to get the pipe hot, wipe the binding with a wet rag, and bend it using a strip of thin steel as a backer.
I found the key was to not soak the binding.
I use a heat gun for putting tight bends in plastic binding.

I may try using the gun to heat the pipe as stated by Karl.
Trying to regulate the temp using the torch was difficult.

I've been using a paint remover heat gun, blowing into a 3" copper pipe with about 96% of the end covered. Its worked well for bindings and herring bone.
Haven't used it on sides yet. It can easily be regulated with a rheostat.

In regards to bindings, I use a 4' piece of plumbing 3/4 plastic pipe with the end capped off. Fill it full of water and let binding soak for aprox. an hour.
So far curly maple and herring bone has been a snap. You might want to use a strip of ie. pop can alumnium to hold down the maple grain so it won't lift when bending
Top

I got a small iron used to apply plastic covering to light weight model airplanes. Made by Top Flight and carried many places. about 1"x3". Like a big soldering iron.

Peter Wilcox wrote:I bought one of those 11 setting digital guns - just didn't work out for me. I made a jig to hold the pipe and the gun, and it eventually lit the jig on fire and melted the end of the gun. Now I use a charcoal lighter.

I'm sorry Peter but the angst in this post made me chuckle. . . .still haven't gotten over it?
I have a lot of those escapades.
Top

I use a heat gun for a lot of things and have worn a few out. I like the Milwaukee but wish it was a little better at staying upright when you set it down hot. I have a 2 1/2" short pipe fitting screwed to the wall that'll act like a holster. 5/16 hole on one side to get the screwdriver tip into and an 1/8" hole on the other for the screw that holds it to the wall.
Top

I’ve used the hot air gun for removing fingerboards and plates for repairs.

Mostly to try something really cheap, I rigged up this for bending. I used it on violin sides and linings and for small pieces of bindings for repairs. They are curling irons I picked up at a salvage place for a buck. Not enough for guitar sides but useable for small stuff. 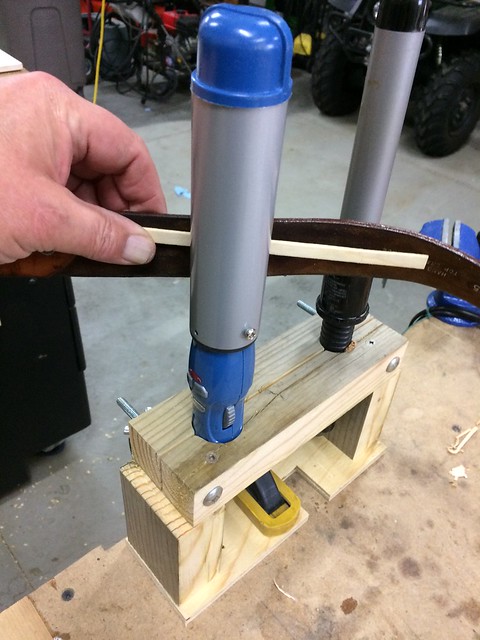